Zunde is an Einherjar from Valkyrie Profile 2: Silmeria. He is a Heavy Warrior and can be found in Sahma Desert.

An adventurer from Quiryl, a small town near Loahm Hill. Zunde became famous for discovering the legendary sword Grand Sting in an old shrine he passed on his journeys. One day, as he and his friends travelled through Camille Hill, he received a request to slay some monsters in the area. He set out full of confidence, never to be heard from again.

Zunde is extremely optimistic and energetic. After being released, he finds himself the center of attention in his new hometown. The villagers consider him as the de facto protector of the town and task him with slaying various monsters in the area, just like in his former life. Nevertheless, he is diligent about his duties and willing to help Silmeria again, if he can only find the time. He also urges Alicia to make the most of every day of her life.

Zunde is an excellent Heavy Warrior. He has top-notch STR and learns his attacks in a very good order: he notably starts with both Dreaded Radius and Sweep Dive. He will join your party with a Screp. His initial skill is Giant Killer, which is very useful, albeit not unique to him for very long.

Zunde uses the generic Heavy Warrior Soul Crush, Soul Evocation. He will say "I'm gonna put everything into this!" before using it.

A greatsword found at the eastern exit of Sahma Desert. Zunde has a 20% chance of appearing. Dyn and Aaron are the other possible options. Zunde will say "Alright! My time to shine, baby!" when you materialize him.

When you are about to release Zunde, he will ask, "Alright! My time to be free! Is this, you know, alright?" in the menu. If you then choose to release him, he will say "Chase your dreams, baby!"

Upon being released, Zunde will appear at the Inn in Coriander. He will give you a Goddess Pendant if you go see him right before the final boss (you will need to load from the final save point).

Zunde may have a short exchange with Falx at the beginning of a battle, if they happen to be on the same team, despite him having lived and died before his time.

Zunde: Right...now why don't you leave this to me?
Falx: Damn fool! Don't you know your own strength!?

Zunde may be derived from the German word zünden, meaning "to ignite" [1], which fits his exuberant personality. 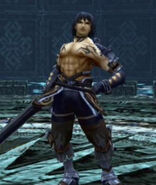