Mithra is an Einherjar from Valkyrie Profile 2: Silmeria. He is a Sorcerer and can be found in the Lost Forest.

Mithra led the military of Fraelgard, a country that existed on an island south of the continent from 80 C.C. to 234 C.C. It is said Mithra was behind the construction of hidden fortresses at key points on the island that fended off would-be invaders from the continent. However, a mistake by a subordinate raised suspicions of treason against the king. During a battle in 145 C.C. Mithra was left to die on the battlefield and was eventually captured. For the entire year he was held captive in a dungeon, Mithra was subjected to unspeakable tortures, yet never betrayed his country. When his corpse was later delivered to Fraelgard without eyes, ears or tongue, the king is said to have broken down in tears at his own shameful folly.

Despite his tragic end, Mithra remains level-headed and has no trouble accepting whatever fate has in store for him. He is grateful to Silmeria for having chosen him, stating that she helped him regain enough of his powers to be able to make a living for himself. After the Sovereign's Rite in Dipan, he is also able to sense that she is in distress, despite the fact that his connection to her was severed after his release. He also mentions feeling a bond with the land in the Lost Forest region, saying that he spent a lot of time there during his previous life.

Mithra is a very good Sorcerer, especially considering he is the first one you get. He is the first to learn Might Reinforce, proceeds to obtain Sap Power relatively quickly and has good Great Magic. However, he lacks Chaotic Rune, and other Sorcerers will eventually catch up to him. He will join your party with a Ruby Mace and a Cloak. His initial skill is Break Up.

Does not learn: Chaotic Rune

Mithra is an Ice Sorcerer. As such, he uses the Great Magic Tidal Wave. He will say "Follow the path to destruction!" before using it.

A staff in the last area of the Lost Forest, standing in a pool of water next to the save point. Mithra is the only possible option. He will not say anything when you materialize him.

When you are about to release Mithra, he will ask "Have you finished with my powers?" If you then choose to release him, he will say "I will treasure the life you have given me."

Upon being released, Mithra will return to the Lost Forest, closer to the entrance of the Royal Underground Path. He will give you a Holy Water of Mithra if you go see him before the end of Chapter 4 and another one right before the final boss (you will need to load from the final save point).

Since Mithra's story is self-contained, he has no battle conversations with any other Einherjar.

Mithra is the name of a deity of justice in Zoroastrianism [1], an ancient Persian religion. His function as an all-knowing, all-seeing defender of truth has led him to be described as "Mithra...of the thousand ears, and of the myriad eyes" [2], which is ironic, considering Mithra's fate in this game.

Mithra being materialized by Silmeria 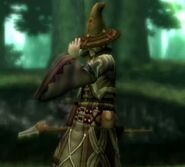