"A young man from a poor village in the Villnore Region. Haunted for years by the tragic death of his childhood girlfriend, Platina, he sees the vestiges of her in Valkyrie. Strong in battle, but lacking the true spirit of a hero."
—Description

Lucian is a main character and a Swordsman Einherjar in Valkyrie Profile.

As opposed to most of Lenneth's Einherjar, Lucian plays an important part in the storyline, especially if Ending A is achieved.

Lucian grew up in Coriander, a small, impoverished village in the north of Midgard, alongside his childhood sweetheart, Platina, who, unbeknown to him, was the human vessel for Lenneth's sleeping soul. The situation in the village was so dire that the inhabitants resorted to selling their daughters into slavery. Lucian's parents thus sold his little sister, telling him that she had died of a sudden illness. However, the boy witnessed the slavers visiting his house and figured out the truth. When the same slavers visited Platina's home, he knew that her parents were also planning to sell her and decided to elope with her in the middle of the night. However, during their escape, they wandered into the Weeping Lily Meadow, where Platina died from a combination of the poisonous pollen from the flowers and her own intense grief at her parents' cruelty. This caused Lenneth to awaken as a Valkyrie, her memories as Platina sealed by Odin during the Sovereign's Rite.

Haunted by this tragedy, Lucian eventually moved to Gerabellum and joined a group of thieves, who were helping the inhabitants of the slums to survive. The group included Barren, Rusty and Claire. The latter developed feelings for Lucian, despite the fact that he could not forget Platina. If Lenneth visits Gerabellum before Chapter 5, Claire will spot her, as she is walking around town in her human guise. Seeing the Valkyrie's silver hair reminds her of Lucian's descriptions of Platina and, jealous, she throws a rock at her. Dolce, an old woman who takes care of the orphans in the slums, either witnesses the incident or hears about it, and brings Lenneth to her home to apologize to her. While she is there, Lucian comes in to give Dolce a share of the day's loot, which he presents as earnings, since Dolce does not know about their thieving. She introduces Lenneth as Meril and explains that Claire attacked her. Shocked, Lucian begins to apologize, only to be dumbstruck by Lenneth's resemblance to Platina, even though Lenneth has no recollection of him. Later on, after Lenneth has left, Claire explains her gesture to Lucian, saying that it is difficult to have to share him with a ghost.

Some time later, Barren makes the mistake of stealing from a nobleman. He is caught and tortured to death, while the nobility seizes this opportunity to order a purge of the slums, thieves and commoners alike. Lucian tells Claire that she should head for the woods outside town while he rounds up the children. But as they exit their hideout, horrified by the extent of the damage to the town, Lucian is struck down by an archer. As he lies dying, he remembers his feeling of loneliness after Platina's demise and laments that he will also be alone in death, despite Claire's protests to the contrary. Realizing that he will also be leaving her alone, he apologizes with his last breath, and Lenneth recruits him. He is astonished to discover that the woman who looked so much like Platina is a Valkyrie, but also expresses regret at having to abandon Claire.

If Lenneth decides to send Lucian to Asgard before Chapter 7, she will notice that he appears troubled. She tells him that he cannot accept his death until he leaves his earthly concerns behind, upon which he asks her to accompany him to Coriander. He tells her the story of Platina's death, taking her through the woods along the same path that they used that night, ending up in the Weeping Lily Meadow. He asks Lenneth to take off her helmet and tells her that she looks exactly like Platina. He realizes that they are completely different people, but he still loves Platina, and the resemblance pains him. Although her memories are still sealed, Lenneth is moved by his words and kisses him before transferring him to Valhalla. She muses that, although love between humans and gods is impossible, she hopes to see him again.

If Lenneth's Seal Level is low enough by the end of Chapter 7, Frei and Loki will encounter Lucian in Asgard, as he continues to brood over the resemblance between Lenneth and Platina. Upon being questioned by Frei, he admits his feelings, and she explains the mechanics of Valkyrie transmigration, stating that Lenneth's human memories are sealed to help her perform her duties, and that only Odin or Freya could break the seal. Loki chastizes her for revealing this, but, after she is gone, says that there might be another way to break the seal. He goads Lucian into using the Water Mirror to contact Lenneth, which would allow him enough time to steal the Dragon Orb. Lucian gives Lenneth one of Platina's earrings, hoping that it will help her regain her memories and go find the other one, which he left at Platina's grave. However, Lenneth is furious at his presumption. Loki then returns and kills Lucian, using him as a scapegoat for the theft of the Orb.

Hearing of Lucian's death, Lenneth is troubled. If she visits the Weeping Lily Meadow in Chapter 8, something will compel her to look for the second earring at Platina's grave. As she does so, the seal on her memories finally breaks, and she remembers her life as Platina. Realizing the full extent of what has happened, she is devastated. Odin senses that the seal is broken, and intiates the Sovereign's Rite, so that Hrist takes over the Valkyrie's body. As she attempts to coerce Arngrim and Mystina into helping her rescue Silmeria, Lenneth, now only a soul, defends them, but is damaged in the process. With the help of Lezard, Arngrim and Mystina manage to save her, preserving her soul in the homunculus she had previously spared in Lezard's tower and forcibly expelling Hrist from the Valkyrie's body. After she is whole again, Lenneth returns to Valhalla to confront Loki. As she battles him, he uses the power of the Dragon Orb to destroy the entire world. However, the cries of all the world's souls awaken Lenneth's compassion, and her sojourn in the half-elven homunculus' body allows her to gain the power of Creation. She defeats Loki and restores both Asgard and Midgard (with all their inhabitants).[1] After she absorbs Loki's soul, Lucian, who has also been reborn, appears beside her, and they reunite with a kiss.

Lucian is one of the best characters, albeit with a lacklustre PWS. His most unique and useful feature is his Shining Bolt attack, which deals very good damage, allows him to break an enemy's guard and produce experience crystals, purple gems or treasure chests. Moreover, due to a glitch, this attack will sometimes fill the energy gauge all by itself, which will allow other characters to use their PWS or spells more often. He joins with a Sallet, Cuirass, Gauntlet, and Greaves equipped, unfortunately to get the best ending you have to send him to Valhalla so it’s best to transfer him ASAP.

Lucian can be recruited in Gerabellum on Chapter 5. He is not present in the Easy mode.

Despite what his character description states, at 48, Lucian's starting Hero Value is the highest of all the Einherjar, and he only has one negative trait, making him an ideal transfer candidate. In order to achieve Ending A, he must be transferred by Chapter 6. Due to his Nimble trait, he is better suited to meet the requirements for Chapter 5, but the player can save him for Chapter 6 to get more mileage out of him. If the player aren't aiming for Ending A, he can meet the requirements for Chapter 5 and 8. 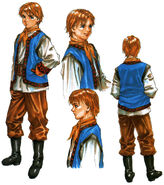 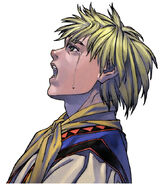