Loki is the primary antagonist of Valkyrie Profile.

Loki is a half-Aesir and half-Vanir. While allowed to live in Asgard, Loki is not held in high regard and constantly suspected of being up to no good. Odin and Freya sealed his power, Loki has an adult or vanir appearance once he obtains the Dragon Orb. The only Aesir he is seen associating with is Frei. Frei appears to honestly see Loki as a friend, and in the manga she is devastated when Loki turns against Odin.

Loki secretly works to usurp power from Odin by stealing the Dragon Orb. He then murders Lucian, using him as a scapegoat for the orb's theft. After killing Odin's enemy, Surt, he goes on the offensive, killing Odin, and taking control of Asgard. A nihilist, his only wish is for the destruction of all life (due to disrespect and not being accepted by his blood races), and in the introduction to the final battle, uses his power to destroy Asgard and Midgard. However, Lenneth undoes the destruction, revealing her power of creation, and subsequently kills Loki.

Loki is fought in Asgard Hill as the final boss of Ending A. Initially the player just need to survive for 3 turns. Afterwards the battle will restart with Lenneth automatically using a Glance Reviver.

Loki have three attacks: a normal attack and a double attack which does 2 hits; both of which may inflict Faint, and Extension Force which does 5x Fire damage to the entire party and cannot be guarded/avoided. He will cast either Carnage Anthem or Dragon Orb (treated as a Great Magic which does 3 hits of 1.5x Ice damage) every four turns until his HP falls below 25% where he will always use Dragon Orb. He also sometimes use Indiscriminate where he casts four random attack spells at random targets; should any of the first three spells are reflected by Reflect Sorcery or Mirror of Pleiades, the rest of the attack will be interrupted. 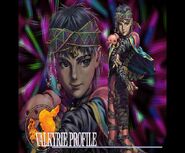