"A gentle young man from Crell Monferaigne pressed into military service by his fanatical and self-righteous country. It's tragic that such a peaceful soul should be sent to his death on the field of battle."
—Description

Llewelyn is an Archer Einherjar in Valkyrie Profile.

A meek and sensitive young man from Crell Monferaigne, Llewelyn gets drafted into the army when the kingdom decides to wage yet another war. Forced to leave for battle at sea, he meets his fiancée, Millia, in a grove on the outskirts of the city. Millia's parents have advised her to break off the relationship, and Llewelyn suggests that they may be right, but Millia refuses, saying that she will wait for him. Having previously remarked that the wind in the trees sounded like the sea, she says that this will remind her of him while he is away. He embraces her, promising that he will stay safe and that they will marry when he returns.

However, Llewelyn dies at sea, whereupon Lenneth recruits him as an Einherjar, and his empty coffin is returned to Crell Monferaigne for a symbolic burial. Millia's parents attempt to arrange a profitable marriage for her, but she refuses once again. She visits the grove to feel closer to Llewelyn's spirit and explain the situation to him, but due to the way he died, the wind in the trees now distresses her. Seeing her pain, Lenneth tells Llewelyn that he should comfort her, since she has ceased living herself since his death. She then allows him to appear to her. He embraces her and says he will always be watching over her.

If Lenneth returns to the grove after recruiting Llewelyn, he will find Millia's necklace (Goddess Pendant) lying on the ground. Lenneth tells him it is made of lotus flowers; women wear them to pray for the protection of their loved ones.

Llewelyn is a mediocre character. His normal attacks are lacklustre, and his only notable feature is his PWS, which can score a lot of hits against large targets. However, this is only situationally useful, thus making him an expendable party member.

Llewelyn can be recruited in Crell Monferaigne on Chapter 1.

Llewelyn's starting Hero Value is a very low -88 and not easily raised, as he does not have many positive traits. He can meet the hero requirements for Chapter 1 and, at a stretch, 3. Considering his overall low usefulness in battle, he therefore makes a prime candidate for early transfer.

Llywelyn is a Welsh name compounded from two other names: Lugus (a Celtic god, the equivalent of Mercury) and Belenus (the Celtic god of the sun, the equivalent of Apollo). This may suggest that Llewelyn is dedicated to the gods (which would fit the strong religious outlook of Crell Monferaigne), and thus destined to die. 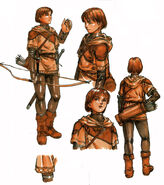