Leone is a major character from Valkyrie Profile 2: Silmeria who plays an important part in the storyline. She is a Light Warrior and joins the party in Chapter 3.

Leone appears to be both kind and decisive. She knows what she wants, but is also diplomatic and willing to compromise. Over the course of her presence in the party, she warms up to Alicia and even comes to sympathize with her plight, as well as Rufus'. She becomes somewhat of a sisterly presence for Alicia, until she drops her disguise.

After unsuccessfully trying to bring Silmeria back to Asgard, Hrist is ordered by Odin to instead track her progress as she searches for the Dragon Orb, which he covets as well, as a means to obtain more power. Thus, she takes on a human disguise and poses as Leone, a mercenary and treasure hunter. She teams up with Arngrim, another mercenary, at an unspecified time, and they encounter Alicia and her party in the Serdberg Mountain Ruins, the last recorded location of the Orb. Arngrim gets into a scuffle with Dylan, but Leone pacifies the two men and offers to team up. Despite Dylan's reluctance at dealing with strangers, Alicia insists on allowing them to join, saying that they're not after the same thing. Leone and Arngrim join the party, but not without Leone noticing the Ring of Mylinn on Rufus finger.

At the summit of the Ruins, the dais intended to hold the Dragon Orb is empty. Alicia attempts to call Silmeria for object reading to figure out where the Orb was taken, but Silmeria is reluctant. She has realized that Leone is Hrist and does not know what her intentions are. However, Leone keeps up her disguise, even after Lezard reveals Silmeria's presence. Picking up on her mention of the Orb, she requests to continue travelling with the group, under the pretext that the Orb is rumoured to be surrounded with treasure. Silmeria does not object, but warns Alicia to watch her back. She does not reveal Hrist's presence, for fear of causing a confrontation.

As the party makes its way out of the Ruins, Arngrim admonishes Rufus for resting, which leads Dylan to call him a graverobber. Seeing the ensuing scuffle, Leone asks whether the party distrusts them and appeals to Silmeria, whom she designates as a Valkyrie, much to everyone's surprise, as it has not been previously specified. Nevertheless, Silmeria still keeps up appearances, and upon being asked whether she can read minds, accepts to try on Leone and Arngrim, to alleviate suspicions. Whether it is because of her determination to keep the situation peaceful, or because Hrist blocks her powers, she says she is unable to detect anything, and Dylan defuses the situation by apologizing to Arngrim. The party then moves on.

Despite this incident, Leone manages to gain Alicia's trust. As the party rests during its exploration of Audoula Temple on the Lake, where the Orb's trail leads them next, she shows admiration for Alicia's strength. This prompts Alicia to reveal their real goal of saving Midgard and Dipan by finding the Dragon Orb. When Arngrim comments that it is not much different from treasure hunting, Alicia protests that they are trying to avoid war with the gods, and Leone remarks that it is nobler than graverobbing. Alicia then remarks that she does not think of either Arngrim or Leone as thieves, but rather allies of Dipan. Arngrim appreciates the thought, even though he doubts its honesty, but Rufus tells him that, since Alicia is the princess of Dipan, ingratiating himself with her could be profitable for him later on. Dylan is suspicious of Leone's lack of surprise at the revelation of Alicia's lineage, but she deflects further suspicion by saying that Alicia has a "certain air" of royalty about her. This also has the effect of further improving Alicia's opinion of her.

The dais in the Temple is also empty, but an accident leads to Rufus revealing his real identity as a half-elf, and the replacement vessel for Odin, should his own body ever deteriorate. Seeing his anger and knowing that he has been raised as a farm animal in the Forest of Spirits appears to trouble Leone.

The party proceeds to Surts Volcano Caverns. As they rest during their exploration, a conversation between Alicia and Rufus troubles Leone further. They discuss the fact that they are both hounded by the gods, and that their plight makes them afraid to sleep at night, Alicia even stating that she does not believe the gods will ever grant them peace. When the party reaches the dais, they find it empty once again, and the next destination is determined to be the Crawsus Forest Ruins.

However, the party also finds the body of a dead adventurer near the dais. Leone laments the waste, and when Alicia asks her whether the man was an acquaintance of hers, states that it is simply sympathy for one of her kind and starts digging a grave for him. Arngrim remarks that he is too busy staying alive to worry about sympathy for the dead, and she ominously remarks that someday, this might be him. Alicia offers to help her, but she says she will catch up with the party. Everyone leaves, except for Lezard, who has been suspicious of Leone from the start. He lingers behind the others to witness her recruiting the adventurer as an Einherjar, but keeps his discovery to himself.

On the way to the Crawsus Forest Ruins, Alicia collapses from exhaustion. Leone comes dangerously close to revealing her identity once again, as she displays her concern by addressing her as Silmeria. When asked how she knew that Silmeria was in control of the body rather than Alicia, she explains that she can tell the difference by their eyes. She takes care of her, and Silmeria comments that this must be how having a sister must feel like, a bait which Leone avoids by stating that she has never had a sister. When Alicia regains control, she asks her what she will do if there turns out to be no treasure near the Dragon Orb. Leone denies having any views on the Orb, which is obviously a lie, but she does appear to be confused by her display of concern.

After passing through Crell Monferaigne, the party sets up camp on their way to the Crawsus Forest Ruins. Arngrim asks Alicia about Dipan's grudge against the gods, and Dylan explains that it stems from the fact that a Valkyrie once forced one of Dipan's kings to become an Einherjar. This appears to make Leone uncomfortable, suggesting that Hrist may have been the one responsible. Arngrim then realizes that Dylan is an Einherjar, much to everyone's amusement except Leone's, a fact that Lezard, once again, does not fail to pick up on.

At the Crawsus Forest Ruins, Rufus and Arngrim set off to scout the area, and, while the others wait for them, Leone asks Alicia how it feels to have to share her body with Silmeria. Alicia explains that it felt like a curse at first, because it caused her to be exiled from Dipan. But now, she feels that her ordeals have not been in vain, because Silmeria's presence has given her a new sense of purpose. This new proof that the gods' actions cause humans to suffer makes Leone thoughtful yet again.

The dais in the Ruins is also empty, but it finally leads the party to the real location of the Orb, the Palace of the Venerated Dragon. As Alicia attempts to claim it, Leone intercepts it and reveals her true identity as Hrist, even though she also warns Silmeria not to attack so as not to endanger Alicia's life. When Silmeria objects to the gods using the Orb, Leone states that if it falls into the hands of humans, things will be far worse. Nevertheless, angered by her deception, Arngrim attacks Hrist, only to be defeated and forcibly made an Einherjar.

Leone is a mediocre Light Warrior. She has a unique Soul Crush, but no unique attacks, although some of her multipliers differ from the other Light Warriors (either a little higher or a little lower). She lacks in damage and combos, learns no spells and has very low HP, making her easily forgettable. She will join the party at level 8 with a Rapier, Silver Sallet, Cuirass, Gauntlet and Leather Boots. Her initial skill is Spirit Control, which can be handy, but is not enough of a reason to use her. She will rejoin in the Seraphic Gate with any other skills you may have taught her.

Leone's Soul Crush is called Sublime Horn. She will say "The passion of the battle envelops me!" before using it.

When Leone leaves the party at the end of Chapter 3, you may receive various items based on her level. They will be automatically added to your inventory, along with whatever equipment she was wearing.

Leone temporarily joins the party in the Serdberg Mountain Ruins in Chapter 3 and leaves at the end of the same Chapter. She will only rejoin permanently after defeating Gabriel Celeste on the first floor of the Seraphic Gate.

Leone's name may be a feminized version of Leon, a name deriving from the Greek word λέων (leōn) [1] or the Latin word leo [2], both meaning "lion". Leone would then translate as "lioness", which could be a reference to her fierceness in battle. 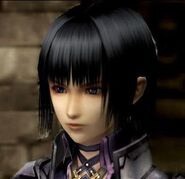 Leone at the Serdberg Mountain Ruins 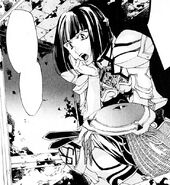 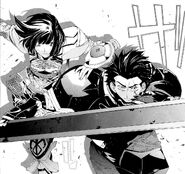