Kraad is an Einherjar from Valkyrie Profile 2: Silmeria. He is a Heavy Warrior and can be found in the Royal Underground Path.

Hailing from a remote village in the North of the continent, Kraad was one of the original founders of Villnore. Legend says his sword arm sliced enemies armor and all, while his steel-like body could repel speeding arrows. It is also said that Villnore's first king gave Kraad his own sword and armor after gazing upon his battered arms, as repeated battles during the founding of the city had taken their toll. Three years after the country was founded, Kraad was struck by a poisoned arrow while putting down a rebellion led by Tyrith, which ultimately led to his death.

Kraad was married to Circe, a legendary swordsmith, who created the Kraadicator and Kraadmail for him. After giving Alicia the Kraadicator as a present for releasing him, he is notably worried about Circe's reaction. He also believes that humans need to prove their worth to the gods in order to make them stop seeing them as inferior beings and exploiting them. On that note, he feels it is important for him to keep up his training.

Kraad is an excellent damage dealer with a very good HP growth, which may cause a dilemma as to releasing him, because he also gives a very good reward for doing so. He will join your party with a Bastard Sword, Leather Mail and Leather Boots. His initial skill is Fists of Iron, which is very useful, but readily available to everyone soon after you obtain him.

Kraad uses the generic Heavy Warrior Soul Crush, Soul Evocation. He will say "Your future is no more!" before using it.

A greatsword in the Royal Underground Path, two rooms down from the first Light Warrior relic. Kraad has a 50% chance of appearing. Roland is the other possible option. Kraad will say "It's been a while since I last fought" when you materialize him.

When you are about to release Kraad, he will ask "You're freeing me!? Have I really become that strong?" If you then choose to release him, he will say "I hope you don't regret this."

Upon being released, Kraad will appear in a house to the right of the Armory in Villnore. He will give you the Kraadicator, an excellent greatsword, if you go see him before the end of Chapter 4.

Kraad may address his wife Circe at the beginning of a battle, or be addressed by her, if they happen to be on the same team. The armor referred to in both cases is most likely the Kraadmail.

Kraad: I owe you thanks. The armor you left me saved my life many a time.

Circe: Have you gained weight? Can you get into my armor?

Despite being responsible for her death, Kraad has no conversation with Tyrith.

Kraad may be derived from the Sanskrit term krad, which means "to roar, to cry" [1]. This could be a reference to his fierceness in battle.

Kraad has the same voice actor as Roland, Seluvia, Xehnon and Masato. Thus, they share most of their battle quotes. 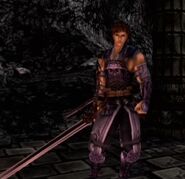