"First Princess of Artolia. Behind her pure, sweet image lies a pampered princess with a heart of steel and a razor-sharp tongue."
—Description

Jelanda is a Sorceress Einherjar in Valkyrie Profile.

Jelanda is the spoiled, temperamental princess of Artolia. However, despite her brash and tomboyish behavior, she genuinely loves her father and would go to great lengths to defend his honor. Thus, when Arngrim, an arrogant Artolian mercenary, insults the king to his face in front of the entire royal army, she is indignant. Lombert, a royal councillor, urges her to calm down, but she hatches an elaborate scheme to get revenge. Posing as a commoner by the name of Angela, she seeks Arngrim out and offers to hire him for a job. Despite his suspicions at her rather poor disguise, Arngrim decides to play along, and they meet at a Yamato restaurant to discuss details. However, Jelanda's personality gets the better of her: she orders more food than she is able to eat, rudely complains about the restaurant's traditional cuisine and finally passes out after mistaking sake for water. Embarrassed, Arngrim nevertheless brings her home to recuperate. However, as she sleeps, her bonnet falls off her head, and Arngrim finally recognizes her, realizing why she has come. Shortly afterwards, she awakens and leaves in a hurry, flustered at finding herself in a compromising position, but promises to return the next day. Understanding her motivations, Arngrim plans to apologize for his behavior.

However, the next day, Jelanda fails to show up. Instead, a cloaked figure arrives to offer Arngrim a job: he is to accompany a load of unspecified cargo to Villnore alongside the thief Badrach. Along the way, the pair is intercepted by the Artolian army. They escape, but not before witnessing that their cargo was, in fact, an unconscious Jelanda. Badrach reveals that Lombert is a spy for Villnore. It seems that he planned to deliver the princess to Villnore as a means of blackmailing Artolia. However, he also had a failsafe: to avoid suspicion, he sent a patrol in pursuit of the cargo, and, in case they intercepted it, instructed the knights to give some medicine to the princess, which turned out to be Ghoul Powder. The Powder transforms Jelanda into a demon that destroys everything in its path. As Badrach runs away, Arngrim confronts her, only to witness the arrival of the newly awakened Lenneth, still accompanied by Freya and drawn to the presence of the demon. They help him in battle, and Lenneth recruits Jelanda as an Einherjar, possibly because of her devotion to her father. Arngrim then returns to Artolia to avenge her, but is quickly subdued by Lombert's magic. Jelanda, whose opinion of Arngrim has changed for the better after seeing him defending her, implores Lenneth to help him, which she successfully does. However, the royal guard appears, and Arngrim kills several soldiers. Upon seeing the carnage, the captain of the guard, father of Arngrim's friend Lawfer, asks the mercenary whether he would really raise his hand against him. Knowing that he has avenged Jelanda's death, but also reluctant to attack a man that he respects, Arngrim chooses to commit suicide rather than cause further bloodshed. Seeing this, Lenneth recruits him, much to Jelanda's happiness.

Jelanda is the first Sorceress the player can obtain and joins with both an attack and a restorative spell. She is average in combat, but since she may be the only Sorcerer for a while, depending on recruitment odds, she will prove to be a valuable ally, should the player decides to keep her. Her Wait Reaction familiar is a parrot.

As Jelanda is a Sorceress, her PWS will vary depending on her assigned attack spell and her weapon; she will either cast the same spell three times in a row or use Great Magic, if her staff has that property.

Jelanda is automatically recruited in Chapter 0 alongside Arngrim.

Jelanda's starting Hero Value is -41, and she can meet the requirements for Chapter 1, 4 and 7 with relative ease. Sending her up during Chapter 1 may be risky, as the player might then be left without a mage for two Chapters. However, considering that Sorcerers/Sorceresses are the most numerous class in the game, she is by no means irreplaceable.

Jelanda may be a variation on Yolanda, a name derived from the Medieval French name Violante, meaning "purple". The colour purple is often associated with royalty, which is appropriate for a princess. 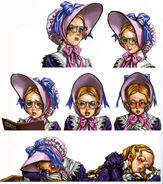 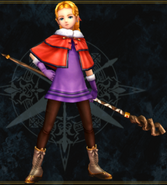 Render in Valkyrie Anatomia: The Origin.