The Hall of Valhalla is the palace of Odin in Asgard. He resides there with Freya and any Einherjar deemed worthy to be sent to Asgard. The Hall contains the Water Mirror, a powerful device which allows communication with any living being and transportation to any chosen location. The Hall of Valhalla is briefly featured in cutscenes in Valkyrie Profile and as a dungeon in Valkyrie Profile 2: Silmeria. The latter contains several puzzles that involve breaking coloured seals in order to proceed further.

The Hall is mostly a setting for Lenneth's awakening ceremony, as well as any conversations involving Odin and/or Freya. However, in Chapter 7, it becomes the stage for Loki's confrontation with Lucian at the Water Mirror, after the former lures the latter into contacting Lenneth, providing him with a distraction to steal the Dragon Orb.

After Lezard defeats Odin at the top of Yggdrasil, Alicia and Rufus, whom she has had to materialize after his demise during the confrontation, make their way back to the bottom, intent on storming the Hall of Valhalla to recover the Dragon Orb and attempt to find Brahms. Along the way, they encounter Arngrim, who is thoroughly disgusted of his experience as an Einherjar and desires to make amends for his actions. Reluctant to exact revenge - as he was, after all, a victim as well - Alicia offers him to join them once again. At the Water Mirror, they find the crystal that holds Brahms and the Dragon Orb. They decide to use the Mirror to transport them back to Midgard, but they are confronted by Hrist. She reveals that Lezard has created a pocket dimension independent of Yggdrasil by using the knowledge of the Philosopher's Stone and the power of Silmeria. She offers cooperation to help save her and stop Lezard, but Freya intervenes to try to stop them. The party must fight her, and Hrist subsequently uses the Orb to defend them. This allows the party to escape, but also shatters the Water Mirror. Hrist takes them to Lezard's pocket dimension, a single shard of the Mirror as their only way back.

In Norse mythology, only half of the Einherjar chosen by Valkyries went to Valhalla to dwell with Odin, while the other half went to Fólkvangr, a meadow ruled over by Freya.

The name Valhalla is derived from the Old Norse valhöll, meaning "hall of the slain" [1].

The Hall of Valhalla in Valkyrie Profile 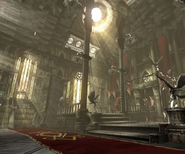 A room inside the Hall of Valhalla

Hrist's Einherjar in the Hall of Valhalla
Community content is available under CC-BY-SA unless otherwise noted.
Advertisement