The strongest foe in various games of the Valkyrie Profile series, the Ethereal Queen (misspelled as Iseria Queen in Valkyrie Profile) is a powerful woman whose might is unbelievably catastrophic. She appears as the final challenge of the Seraphic Gate.

Once the Ethereal Queen have <50% HP, she will transform into a second for visualized by an imposed angel image beside her, where she will sometimes use Empress Massacre to cause massive damage on a party member. Her Cosmic Spear can do nearly 200,000 damage to the entire party, so it is highly advised to use Sylvan Robe to survive it. Other than those, Guts and Auto Item (with Union Plume at 100%) is a must to face the Ethereal Queen.

Appears still as the most powerful entity in the game, wherein the Seraphic Gate is a separate dimension from Midgard, where she governs it as the ruler and queen. In the sequence with her, she vocalizes that she is the most powerful being of that dimension and invites Alicia to stay with her in the Seraphic Gate. Alicia refuses her request, prompting a battle. Her attacks are Astral Maze, Explosion, Prismatic Missile, Scarlet Shield, Dazzled Eye, Regenerate, Empress Massacre, and her Soul Crush is the Great Magic Phantom Destruction. Defeating the Ethereal Queen rewards the player with the most powerful staff in the game, the Holy Wand of Telos, which grants use of the Holy element Great Magic, Phantom Destruction.

Valkyrie Profile: Covenant of the PlumeEdit

The Ethereal Queen also makes an appearance as the most powerful foe in the game. Her attack is Sacred Javelin, which she can cast multiple times, just like Gabriel Celeste and the essences during the first battle against Garm. Her Soul Crush is Phantom Destruction. She gains more elemental resistances and her stats increase more exponentially as the player goes through more and more "laps" of the Seraphic Gate.


Even though the Ethereal Queen is only shown as a "superboss" on most of tri-Ace games without involving herself in the main plots of the games, she is always shown talking with the protagonists before the battle, denoting certain characteristics that vary almost zero within each game. Most of the talks with the protagonists involve how she is "very different from Gabriel Celeste" and how the protagonists will "know what true despair is" meaning she is egotistical or over confident of herself, but given how she most of the time includes insults such as "the likes of you" it denotes more of an egotistical personality. Other games feature her in a more passive and respectful way, in how she is impressed that the protagonists have "reached so far" and how she offers them to server her or live within her realm under her command, something they do not really approve as they are not eager to serve her, making her to take on arms in those who oppose her word normally saying "you wish to fight, so be it" that is used in Valkyrie Profile 2: Silmeria and Valkyrie Profile: Covenant of the Plume. showing how her personality does not vary within the series. However this admiration she feels for the protagonists, often dissapears quickly either by a next dialogue in her talking, or in game quotes. In Valkyrie Profile: Covenant of the Plume, she shows a liking to cute things, such as the Hamster, and apparently either does not have much confidence or lacks assertiveness, as is shown in the rather humorous scene with her and the Norse Gods regarding a "Valkyrie Profile" spin-off of some sort. In both of these scenes, she is somewhat scolded and confronted by Gabriel Celeste.

Her relationship with Gabriel Celeste, has been a matter of much debate. It is implied they are mother and son, but also they are referied as siblings, the latter being the most known and accepted. One change that has been made to resemble a more close link within the two Celestial Beings, is the change of the soundtrack. Her first appearance in Star Ocean 2: Second Story and Valkyrie Profile feature her with the theme "Mighty Blow" that is later changed to "Incarnation of the Devil" that was the original theme for Gabriel Celeste, which the two often share even within the most recent titles.
The first games in which she appears, such as Star Ocean: Second Story, Valkyrie Profile and Star Ocean: Blue Sphere, feature Ethereal Queen as a mere pallete swap of Gabriel Celeste (he having blue wings and blue aura, she having both red) and much harder with few unique moves, this later changes in later games such as Valkyrie Profile 2: Silmeria, Radiata Stories, Star Ocean: Till the end of time, and so on. In which both have different clothes, different wing shapes, and sometimes are featured with different color of skin and different hairstyles, being also the Crescent Moon-shaped staff originally used by the two, kept to her, while Gabriel is more often seen using a Lance-shaped rod, if not a real Lance.

The Ethereal Queen is normally named as the hardest foe in each game, however some titles make an exception to this rule. Valkyrie Profile 2: Silmeria feature Dirna Hamilton as a superboss only fought when the Ethereal Queen was defeated, Star Ocean: Second Story features Indalecio limiter off as stronger than her, and Star Ocean: Till the end of time features Freya as a superboss that can only be fought with the orb acquired after defeating her, being in this game the first one in which the Ethereal Queen is commonly called as easier than Gabriel Celeste, being the only apparently time in which the latter has gained certain superiority over her, although this can be attributed to the difference in the player's level when they are fought. If fought at the same level, the Ethereal Queen remains the more powerful.

Her moves, orginally featured dark attacks such as Shadow Flare or Cosmic Spear, now often feature the use of Holy attacks, such as Celestial Star or Phantom Destruction, and also more "wicked" moves such as unleashing powerful rings or "halo" shaped blasts that normally hit the player for multiple times, being this included in her most known move "Empress Massacre" in which she brutally hits the player with an incredible ammount of hits (normally 20+) for astonishing damage that guarantees the character attacked to not survive unless they can revive by themselves. Another move that was later removed was her ability to transform, that was featured in Valkyrie Profile in which she shows an image looking similar to her but in a more evil way, where she literally becomes more agressive, something that was later removes in later games.
Even if the Ethereal Queen only appears as a superboss, alongside Gabriel Celeste, she has become somehow popular, the fact plenty of tri-Ace games give the option to the player to refight her as much as they want and in harder modes, proves players really enjoy fighting her, hence how she still remains as a strong opponent in which winning is by no means easy, unless using strategies that often involve great risks (such as having weakened characters to boost their power). 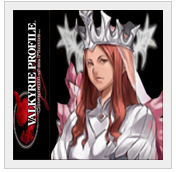 Ethereal Queen VP: Covenant of the Plume
Add a photo to this gallery
Retrieved from "https://valkyrieprofile.fandom.com/wiki/Ethereal_Queen?oldid=15966"
Community content is available under CC-BY-SA unless otherwise noted.