Barbarossa is a kind and compassionate king, but he is driven by the desire to free himself from the gods' grasp after experiencing Odin's interference into his own family. This makes him receptive to the suggestions of the Three Mages, and he soon finds himself involved in their cruel experiments, despite the pain it causes him to make his subjects suffer. Nevertheless, he always has his daughter's welfare in mind, sending her away from home for her own safety, even though she perceives it as abandonment. His nobility of spirit even leads him to defend the Three Mages, despite their treachery, telling Lenneth that they are blameless, since the initiative to oppose the gods came from himself.

King Barbarossa and Queen Malabeth had the misfortune of witnessing their only daughter, Princess Alicia, become the vessel for Silmeria's spirit. The Valkyrie rebelled against Odin's tyrannical rule and allied herself with Brahms, the Lord of the Undead. As punishment, Odin initiated the Sovereign's Rite, planning to place her dormant soul within Alicia. However, the process went awry, and Silmeria remained conscious and able to communicate with the child. Seeing her seemingly talking to herself and mentioning things she should not have been aware of eventually led Barbarossa to realize the truth. Furious at Odin's interference in his child's life, he took council with his Three Mages, Walther, Gyne and Alicia's childhood friend, Dallas. They came up with a scheme for rebelling against the gods, although Dallas urged him to declare Alicia dead and send her away in secret, in order to keep her uninvolved.

The Mages discovered the principles of time travel, creating the Time Machine, as well as the mechanism of the Sovereign's Rite, but their main objective was to locate the Dragon Orb and, using its power, to create a closed timeline independent of Yggdrasil and, thus, of Odin's influence. However, Odin could not let such an affront go unpunished: Dipan was destroyed and Barbarossa executed.

In their hatred towards the gods in general, and the Valkyries in particular, the Three Mages, who have become powerful undead, have summoned Barbarossa's restless soul. His resentment against the gods, as well as his deep regret for his country's downfall, keep him bound to the ruins of Dipan, vociferating against the Battle-Maiden who destroyed it. When Lenneth arrives to cleanse the city, the accusations fall on her, despite her being ignorant of Dipan's fate, and she battles the king twice before realizing that she must find a way to sever his bond with the city. Exploring the castle, she discovers the Time Machine, and as she examines it, the Three Mages activate it, hoping to trap her in the past. She finds herself transported to the time of Barbarossa's execution and realizes that it was the work of Hrist. Overhearing some townspeople saying that Queen Malabeth has managed to hide within the castle, she sets off to find her. Despite not knowing who she is, Malabeth tells her that Barbarossa has been deceived by the Three Mages and entrusts her with his crown, saying that he always wanted to be king until the end.

Lenneth cannot prevent the execution, but, as she stands over Barbarossa's body, she unexpectedly finds herself transported back to her own time, much to the Three Mages' astonishment. She returns the crown to Barbarossa, who appears pacified and explains that he willingly cooperated with the Mages, both feeling responsible for the fate of his country and possibly wanting to preserve his dignity, rather than appearing as a puppet in the Mages' hands. The crown, a symbol both of this dignity and this responsibility, allows his soul to finally rest.

Alicia, now grown up, lives in seclusion in a manor near Crell Monferaigne. However, Odin realizes that Silmeria is still awake and sends Hrist to bring her back to Valhalla. The princess narrowly escapes and, on Silmeria's prompting, makes her way back to Dipan. Silmeria intends to enlist Barbarossa's help in her struggle against Odin. However, when Alicia's party (Rufus and Dylan) reaches Dipan and talks to Dallas in the Three Mages' laboratory, they realize that, not only have the Mages been producing monsters to defend the castle, they also intend to use the Dragon Orb in their schemes, which would be dangerous for the stability of Midgard. Indignant at their intentions, Silmeria confronts Barbarossa, who has come to investigate the laboratory with Walther and Gyne. Seeing that the Valkyrie still inhabits his daughter's body, he refuses to acknowledge Alicia's presence and orders Walther and Gyne to arrest her and her companions, as well as Dallas, for betraying his trust. Alicia and the others try to escape, but are delayed by an encounter with Hrist and find themselves surrounded. However, they are rescued in the nick of time by Lezard, who has been posing as the Mages' apprentice.

Odin then orders Hrist to infiltrate Alicia's group in disguise, as Leone; Silmeria wants to find the Dragon Orb to protect it, and this will allow Hrist to track it down. Everything goes according to plan, and once Hrist obtains the Orb, she attacks Dipan, destroying the city and taking Barbarossa captive, to be executed. Despite having been imprisoned, Dallas remains loyal to his sovereign and even helps Malabeth to hide, for which Hrist also sentences him to death. Walther and Gyne, on the other hand, appear to be cooperating with her. Nevertheless, Barbarossa tells them that he bears them no ill will, which seems to momentarily make them feel guilty.

Alicia and the others race back to Dipan to prevent the execution and manage to (seemingly) defeat Walther and Gyne. However, this does not deter Hrist, and Barbarossa is guillotined as an example of the gods' punishment for disobedience, finally acknowledging Alicia's presence before his death. Walther and Gyne, who are still alive, use the commotion to ingest Ghoul Powder and thus become undead. They rise up again, much to Hrist's astonishment, and flee, but not before Walther forcibly feeds Ghoul Powder to an unconscious Dallas as well. Before the latter transforms completely, he apologizes to Alicia and explains that Barbarossa's motivation was that she could lead a normal life, as her own person. She is distraught that her father could have been led to such extremities, but understands that he did love her.

Barbarossa's spirit is fought as a boss upon entering Lost City of Dipan for the first time in Chapter 6. He is fought twice in a row and defeating him in both fights is required to explore the Dipan Castle.

Barbarossa will cast Guard Reinforce on Turn 3 and Calamity Blast on Turn 5 and every six turns (counting Turn 1 as the first turn) afterwards.

After being defeated in both fights, Barbarossa will reappear when Lenneth attempts to leave the area and will remain until she can put him to rest; getting too close to Barbarossa will force the player to fight him again, only to reappear everytime after he is defeated.

Barbarossa means "red beard" in Italian, and was the nickname of a German emperor and a Turkish corsair (later admiral), both famous for their achievements. This would indicate that Barbarossa is a ruler worthy of admiration, but also with a ruthless edge. 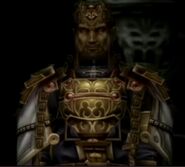 Barbarossa being led to the guillotine (Valkyrie Profile 2: Silmeria)