"A thief who works alone, having refused to enter the Thieves' Guild. His power is unquestionable, but his unique ability to make enemies makes him unpopular. He has a notorious weakness for women and drink."
—Description

Badrach is an Archer Einherjar in Valkyrie Profile.

Badrach is a low-life thief who has robbed and killed countless people. He lives in Villnore, in some rented lodgings managed by a landlady named Geena, but prefers to freelance out of greed, rather than joining the Thieves' Guild. One day, Lombert, the councillor of Artolia, who is also a spy for Villnore, organizes the kidnapping of the Artolian princess, Jelanda, with the aid of the Guild. He hires Badrach and Arngrim, both unaware of the real contents of their cargo, to escort the cart that carries the unconscious princess. Badrach appears to know Arngrim by reputation, but the mercenary only has contempt for him. As they travel to Villnore, they are overtaken by a patrol, dispatched by Lombert himself to avoid suspicion. The two men flee, but not before witnessing that the cargo was, in fact, the princess. Badrach informs Arngrim that Lombert is a spy, and, although he did not know of the kidnapping beforehand, figures that the princess was to serve as a means of blackmailing Artolia. Suddenly, the two men hear screams from the direction of the cart. Lombert had given the guards a medicine in case they managed to overtake Jelanda, supposedly to revive her. In fact, the substance turned out to be Ghoul Powder. Jelanda transforms into a demon and kills all the guards. Badrach escapes, realizing that he has gotten in over his head.

Some time later, an assassin from the Thieves' Guild attacks Badrach outside a tavern in Villnore, possibly fearing his knowledge about the failed kidnapping. Fatally wounded, Badrach limps back to his house. He remembers a seemingly anodyne episode from his past, when Geena told him about a cactus that grew in front of the house and that only bloomed one night per month for a few hours: anyone who witnessed it could have a wish granted. Sensing that he is dying, he laments that nothing good has ever happened to him and frantically begs for help. Lenneth appears, informing him that Hel has asked for his soul. Horrified, Badrach desperately tries to think of at least one good deed to save himself from damnation. Finally, he remembers accompanying some slavers to Coriander. Among their victims was a little girl who took a liking to him. When he realized that the slavers had only paid him half his fee, he left and took the little girl with him, leaving her in the care of the church in Camille, even though he claims it was only to spite the slavers, rather than out of pity. As he recalls this memory, the cactus outside his house blooms, and Lenneth compares this one moment of beauty to Badrach's single good deed. She muses that even murderers and thieves can have a moment of grace, and accepts him as an Einherjar. As they leave, Geena opens the door of the house to find Badrach's body.

If Lenneth visits Camille after recruiting Badrach, a girl (presumably the same one he saved) will recognize him and give him a Handwoven Bandanna.

This girl is widely deemed as Lucian's sister, that was taken from his family, as conveyed in the game intro.

Badrach is a mediocre character at best. His attacks are weak, add little energy to the gauge and will only reliably connect with large enemies. His only saving grace is his propensity for knocking experience crystals out of enemies, if he hits them while they are in the air. He will join with a Cuirass and Greaves equipped.

Badrach is one of the several Einherjar whose recruitment is randomized; he can be recruited in Villnore either on Chapter 5 or Chapter 6.

At -111 (-110 in Valkyrie Profile: Lenneth), Badrach's starting Hero Value is, unsurprisingly, the lowest in the game, and he only has two positive traits, making him poorly suited for transfer. However, as one of those two traits is Nimble, he can be made to meet the requirements for Chapter 5, albeit with difficulty.

Due to the interchangeability of the letters "r" and "l" in Japanese, Badrach's name is most likely a pun on the words "bad luck". This is fitting, considering that Unlucky is actually one of his traits. The English translation could also have been made to sound like the expression "bad rap" (undeserved blame), an ironic take on the fact that not everything Badrach has done deserves damnation. 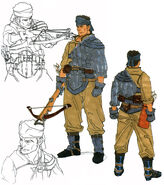 Badrach in the Valkyrie Profile manga

Badrach in the Valkyrie Profile manga