Aaron is an Einherjar from Valkyrie Profile 2: Silmeria. He is a Heavy Warrior and can be found in Sahma Desert.

A captain of the Knights of the Bloodsword, crown defenders of the Arkdain Kingdom that once spanned the continent's northwest. His predecessor to the post was Roland, who was murdered in 577 C.C. after the War of Camille Hill, along with Richelle, captain of the Knights of the White Lily, personal guard of the king of Arkdain's brother. Suspicions lay on Khanon, lord of Gorhla, but there was no evidence, and Khanon thus managed to gain a great influence over the king of Arkdain. Even though he began to realize the error of the king's ways, Aaron was loyal to his duty as a knight. He fought against the Knights of the White Lily, led by his childhood friend Fraudir in the Arkdain Uprising, a civil war orchestrated by Khanon in his bid for power. In 581 C.C., he faced Fraudir in a duel, but she sheathed her sword in the middle of the fight, reluctant to inflict any more pain on her friend. After her death, Aaron, remorseful, refused treatment for his wounds and passed away quietly.

If Alicia speaks to Aaron after releasing him, he will show hesitation upon asking for news of a member of the party. He does not say who it is, but his tone suggests that he may have more than a friendly interest in them. He also seems to be quite humble and devoted to his duties, but finds it difficult to lead a relatively idle new life after the tumultuous events of his previous existence.

Aaron's attack selection is quite good: he notably learns Sweep Dive early on. However, he has the worst HP growth for a Heavy Warrior, which can sometimes be a handicap, and his other stats are not particularly stellar either. He will join your party with a Striking Sword, Iron Helm, Crystal Chainmail, Metal Buckler and Metal Greaves. His initial skill is Mighty Blow.

Aaron uses the generic Heavy Warrior Soul Crush, Soul Evocation. He will say "I'm gonna put everything into this!" before using it.

A greatsword found at the eastern exit of Sahma Desert. Aaron has a 30% chance of appearing. Dyn and Zunde are the other possible options. Aaron will say "It is my duty to protect" when you materialize him.

Upon being released, Aaron will appear at the Inn in Coriander. He will give you 50,000 OTH if you go see him before the end of Chapter 4.

Aaron may have a short exchange with one of three people at the beginning of a battle, if they happen to be on the same team: his best friend Fraudir, his predecessor Roland, and Khanon, who is responsible for all of their deaths.

Aaron: I'm sorry, Fraudir. I have no right to show my face to you.
Fraudir: Not at all. You were always stubborn, even as a child. But this time, we will be together till the end.

Aaron: Please forgive me. I could not save the king.
Roland: Aaron, you fought hard. The shame is not yours.

Aaron: Khanon! Answer me! What did you do to our king?
Khanon: Such a long time ago. I assure you, I did nothing. That poor, sad king just went mad all on his own.

Aaron is a name of Hebrew origin. Its meaning is debated, but one of the possibilities is "bearer of martyrs" [1], which is fitting, considering Aaron's refusal to have his wounds treated.

Aaron has the same voice actor as Dyn, Zunde, Psoron and Farant. Thus, they share most of their battle quotes. 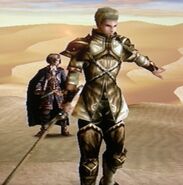